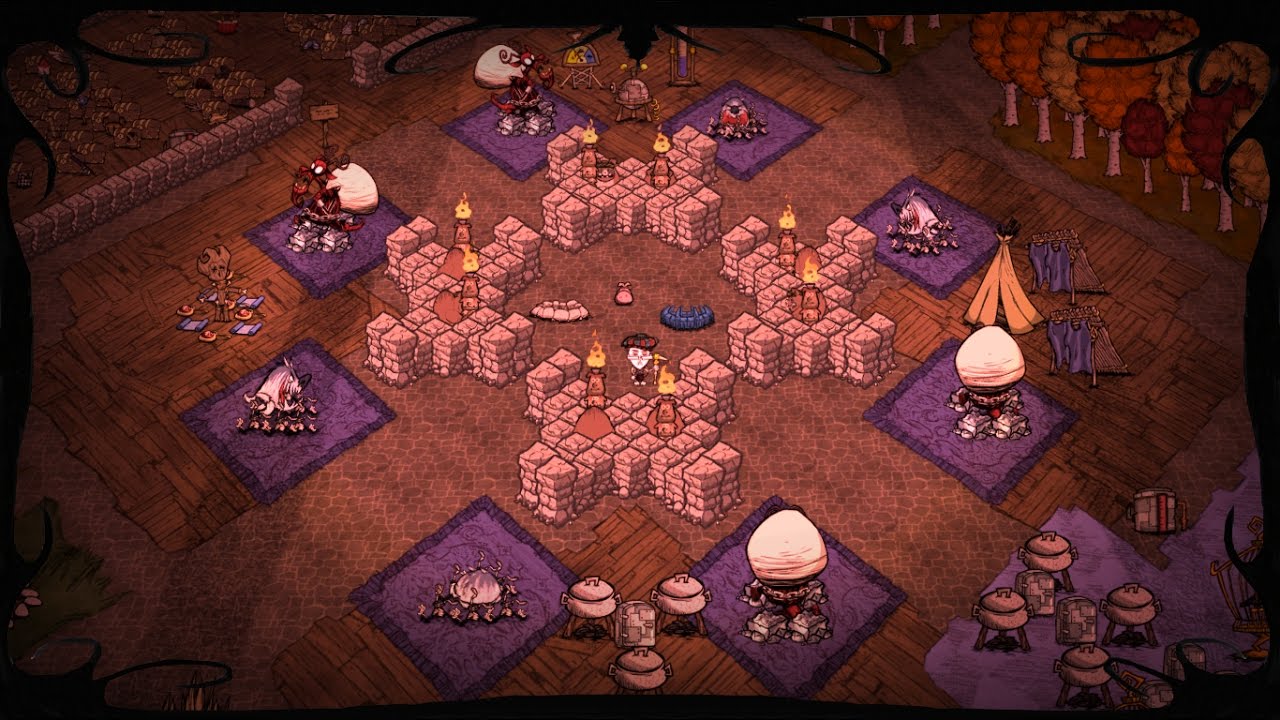 For a 10k subscriber special, I have two mega base tours for ya! First a tour of my Don’t Starve Together mega base, and then a tour of my old school Reign of Giants base.

A lot of you know me for speedrunning Don’t Starve and doing crazy challenges, but I used to be really into base building. You might have seen my Reign of Giants world on reddit since it’s pretty high on the top links. It was even featured in an article on Kotaku surprisingly:

I consider that base to be a bit noobish now, but any exposure for Don’t Starve is good. Exposure means more money so that the devs can keep producing fresh content and updates!

In both the Reign of Giants and Don’t Starve Together worlds, I used pig torches for the centerpiece of the bases. I’m surprised they aren’t more popular. I hardly ever hear anyone mention them. Maybe because they’re relatively rare and people just don’t know about them?

They’re great for base building since they’re so versatile. There are lots of configurations of pig torches you can find, so you can make various layouts and base designs depending on the type you get. You can use the pigs for farms or trap them in walls for infinite light. It looks better to trap them in a single space, but you could also make the enclosure a bit bigger. Free range guardian pigs are more ethical after all.

As far as I know, my RoG base tour album showcased the method of placing items in front of chests to indicate what they contain. It’s awesome to see how ubiquitous it’s become since then. It has a charm about it. Like one of those odd quirks in a game that spontaneously manifests through the behavior of players. I’m not really a fan of the chest signs. Sure, they’re nice and tidy, but at the sacrifice of charm, spontaneity and quirkiness in my opinion.

There’s a pretty sweet varg farm in the RoG base. Since hounds break conventional walls, you can build tree walls, trap a varg behind them, and set up some houndius shootius’ to kill the hounds which nets you quite a lot of gems. Tree walls only work in single player by the way.

I also spent a lot of time in the caves. I set up a cave base camp in a slurtle biome for a couple of reasons. There are loads of dense light bulbs there for me to set up somewhere with infinite light (light from light bulbs never recedes in single player). Besides that, it was nice having slurtles and snurtles at hand to kill ’em for their armor and slurtle slime. Slurtle slime is really great for lantern and miner hat fuel because it never expires. You can also use it as an explosive. The snurtle/slurtle armor is insanely cool too.

The Don’t Starve Together mega base world is relatively old as well. It was generated and played in over a year ago back before Don’t Starve Together even had caves. The caves update took forever, so we lost interest in the world before caves came. Plus I was using a hosting service to keep the world up, and it was starting to cost a bunch. Then the hosting companies decided to start charging double to host caves.

I increased the potential for set pieces in the Don’t Starve Together world, so we had all of the good ones. Developer graveyards, pig torches, reed trap, hound fortress, tallbird fort, and we even had an island! It was perfect for base building.

I start the tour at the base hub, where I created some hound and krampus statues. The krampus were easy. Just teleport them in a confined area and push them where you want them to be. For the hounds, I had to create skeleton walls by dying in specific locations, and then teleporting them inside (obviously placing the telelocator focus before the skeletons). The skeletons have to be pretty precisely aligned or else the hounds can slip through. If they’re too far apart, the hounds just mosey on out like no big deal, but if they’re too close, the hounds have the potential to clip out of the skeleton walls when you load them into the game.

Or my Don’t Starve Together Enraged Klaus speedrun might be appealing:

Maybe you’d be into Endless Bosses which is a challenge series where I have to survive against a never-ending influx of bosses under extreme restrictions (like only being allowed to eat farm food):

If all of that is up your alley, then consider subscribing. Lots more can be found on the channel, and more to come: